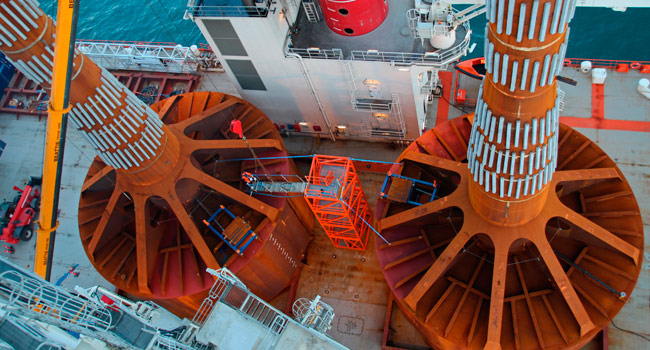 An Aalborg University professor and the Aalborg company Universal Foundation, which has the Norwegian company Fred. Olsen as its main shareholder, has developed THE BUCKET FOUNDATION - a revolutionary invention that will create massive savings in the production and installation of offshore wind turbine foundations. The invention will save the wind turbine industry millions and create new Danish jobs while protecting the environment even more than existing solutions. The newest bucket foundation has just been successfully installed at Dogger Bank.

The actual installation process is an important part of what makes THE BUCKET FOUNDATION unique and significantly cheaper than other types of foundation. The technology makes it possible to install and remove the foundation using a combined spray and suction technique, which means that noise pollution affecting marine creatures is kept to an absolute minimum and secures that the whole foundation can be removed and reused. 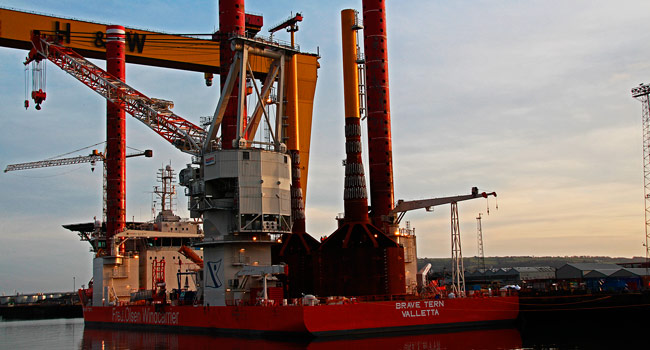 In full scale, the technology consists of a mono pile on top of a large inverted bucket with a diameter of more than 14 metres. The foundation itself can be dragged or barged out to the site, which ensures high flexibility for installation. The foundation is positioned on site, and the bucket is placed on the sea floor before the water is sucked out. This creates a negative pressure which sucks the foundation down into the seabed in a controlled manner. The divided suction and jetting system at the edge of the skirt ensure verticality within 0.1%.

The first foundations have been installed, and the company is working to optimize the solution for mass production in a project supported by the Danish National Advanced Technology Foundation, among others. In addition to this, Universal Foundation is participating in an American project in Lake Erie, near Cleveland. The 120-million-dollar project will be using the Danish company’s advanced suction technology to secure the foundations for six new windmills in the bottom of the lake.

Today, Fred Olsen is the main shareholder in the company, together with the two other co-owners Novation and Aalborg University.