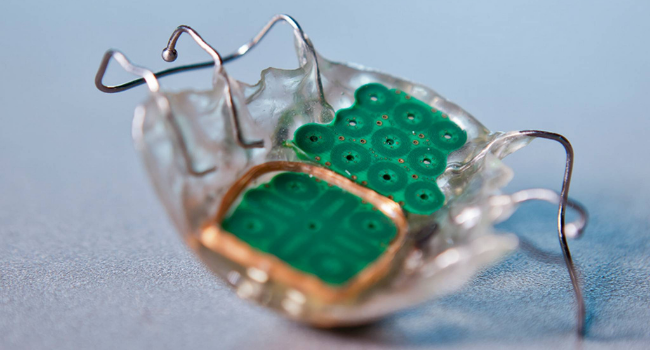 An Associate professor from Aalborg University has invented a brace with sensors that makes it possible for people with heavy spinal cord injury to control both wheelchair and a computer with their tongue. It has since been developed into the product iTongue from the spin-out TKS A/S.

People with spinal cord injury have limited capabilities without help from others, as they cannot use neither arms nor legs. As the tongue is controlled direct by the brain and not through the spinal cord, iTongue makes it possible for people with heavy spinal cord injury to control a computer or control their wheelchair - thanks to associate professor Lotte Andreasen Struijk from the Faculty of Medicine at Aalborg University.

Lotte Andreasen Struijk invented the brace with sensors which basically functions as a remote control. The brace is controlled by a piercing in the tongue and activates the sensors, which are built into the brace, so the brace basically functions like a mouse and keyboard on a computer. This way the device enables people with heavy spinal cord injury to control a computer or their wheelchair.

iTongue has been launched successfully in the market, and one of the users have sent an email saying: ”Before I could do nothing without asking for help. Now I can do many things without help. So for me it is a completely new life.”

The first prototype was developed in cooperation with the School of Dentistry and a dentist from Aalborg. Since then, the invention has been patented and the product developed in TKS A/S, a spin-out company from Aalborg University, with associate professor Lotte Andreasen Struijk as the core in all development.

In addition to iTongue, which is controlled by the tongue, two other variants of the product exists, which can be used by paralyzed people who can move just one finger. iHandle is a small handle, which is attached physically to the hand, while iCTRL is an app, which provides the user with a graphical interface for navigation.