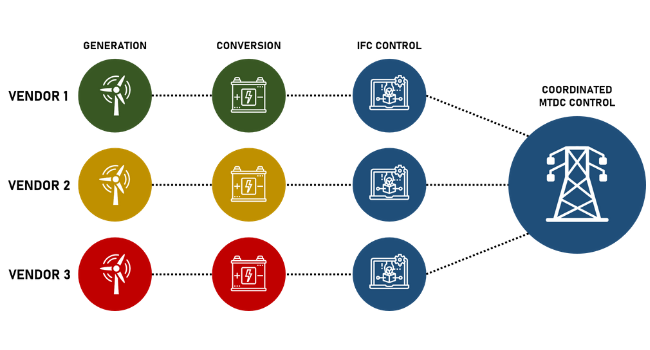 IFC Software: A potential tool in the work of establishing tomorrow's Energy Islands in Denmark

A software based on a PhD project from Aalborg University has shown potential to be used in connection with creating and ensuring a robust design of Denmark's future Energy Islands and the European HVDC network.

Today, in the North Sea region, there are several high-voltage direct current (HVDC) systems using direct current (DC) to transmit bulk power over long distances between two points - from A to B or vice versa. These HVDC systems, right now, only function as point-to-point systems. However, it is envisioned that in the near future, a multi-terminal HVDC transmission system (MTDC) will emerge with the North Sea region being a hot spot, while other parts of the world is likely to get the MTDC grids as well.

The future MTDC system will make it possible to interconnect HVDC links or even add new offshore wind farms directly to an existing link. This will enable transmission of power in a much more efficient way for society. But most importantly it will open up the market for more solutions, allowing TSO’s to optimize investments and construction of power transmission networks, and expand these as needed over time. In addition, moving from point-to-point, to a network architecture, will have the positive side effect that less cable is required and, thereby further contribute to reduced investment cost for the DC transmission system operators (DC-TSOs).
However, it is hard to expand these HVDC systems into MTDC systems, as the existing HVDC systems in the North Sea region are based on proprietary control systems, making communication between systems from different vendors difficult. Thus, a solution is needed in order to make the design of Denmark's future Energy Islands and the envisioned European multi-terminal HVDC network more efficient.

A SOLUTION INSPIRED BY THE LINE FOLLOWER ROBOT CONCEPT

The solution to the problem is to add an additional piece of software to enable the integration of additional converters into the existing HVDC point-to-point system. This software called the IFC software has been developed by Roni Irnawan, a former PhD Fellow and Research Assistant at Department of Energy Technology at Aalborg University.

The focus of Roni Irnawan’s PhD supported by Energinet as part of the COBRAcable project, was the realization that a core problem for TSO’s in going from single link to multi-link HVDC system, is the proprietary control used by vendors, which provides a technical barrier for open market competition. Thereby making it difficult to finance the much-needed expansion of a true HVDC based grid, which is key to the ongoing electrification of society.

In solving this problem, Roni Irnawan was reminded of his bachelor’s study at Universitas Gadjah Mada (UGM) in Indonesia, where he was involved as an organizer in a Line Follower Robot Competition:

In “Line Follower Robot Competitions” a line is drawn in a random shape and a robot must successfully follow this line. The robot has different shapes, sizes, and control strategies to follow the line as fast as possible. Furthermore, the robot was often built by different departments or even universities around UGM.

When I then did my PhD “Planning and control of expandable multi-terminal VSC-HVDC transmission systems” at Aalborg University, I saw that the main challenge was that different HVDC vendors have their own control concept, but with a wish of interconnecting their converter(s) and form a multi-terminal HVDC system. So, I remembered the Line Follower Robot concept and treated the converter just as the robot, with its own control strategy, produced by different vendors.
It was my A-HA! moment, and carried my study to further test the concept. It was overwhelming for me, since the solution was actually pretty simple (well, at least for me) and came up from my experience of looking outside the box, Roni Irnawan explains.

A STRONG COLLABORATION WITH ENERGINET

Today, the IFC software has been implemented as an external function in the simulation programs PSCAD and PowerFactory and a prototype is ready for licensing. The prototype of the IFC software has already been licensed to the Danish TSO Energinet, who sees the IFC Software as a possible tool in the work of establishing tomorrow’s Energy Islands in Denmark:

The software developed at Aalborg University has shown the potential to be a possible tool in the work of establishing a robust and secure design of Denmark’s future energy islands, Christian Frank Flytkjær, Senior Manager at Energinet, comments.

In addition to supporting Roni Irnawan in his PhD studies, Energinet has also collaborated with Aalborg University’s Department of Energy Technology for a long time.
Professor Claus Leth Bak and Associate Professor Filipe Faria da Silva from the Department of Energy Technology were both PhD supervisors for Roni Irnawan, co-inventors on the IFC software, and a part of the COBRAcable project. They are both very pleased about the license agreement and the ongoing collaboration with Energinet:

We always had strong cooperation with Energinet and we are delighted that our innovative tool can be used to make both the North-Sea Energy Island and an eventual Supergrid reality.

The scalability of HVDC grids has long been a bottleneck for further installation and it is amazing that our work can be so important in helping unblocking it. Now, we continue advancing our research on multiple challenges of HVDC grids and offshore transmission (e.g. fault location, weak grid connection, advance modelling), playing our role in the green transition.

COBRACABLE: INTERCONNECTOR TO THE NETHERLANDS

In 2019 Energinet established an electrical connection between Denmark and the Netherlands in collaboration with Dutch TSO TenneT. The interconnector is called COBRAcable and has been designed to meet the future possibilities within MTDC systems and offshore wind farms in the North Sea. Hopefully, the COBRAcable can be a part of a future interconnected offshore electricity grid between the countries bordering the North Sea.
The IFC software has been developed as part of the COBRAcable project, and now has the potential to be a part of realising the project aim to connect one or more offshore wind farms to the COBRAcable.

PROTOTYPE READY FOR LICENSING - DO YOU WANT TO KNOW MORE?

The IFC software is still open for licensing to other TSOs as well as system vendors. If you want to know more about the technical specifications and licensing opportunities, please go to our Open Innovation Licensing page here.

For questions or interest, you are welcome to contact: