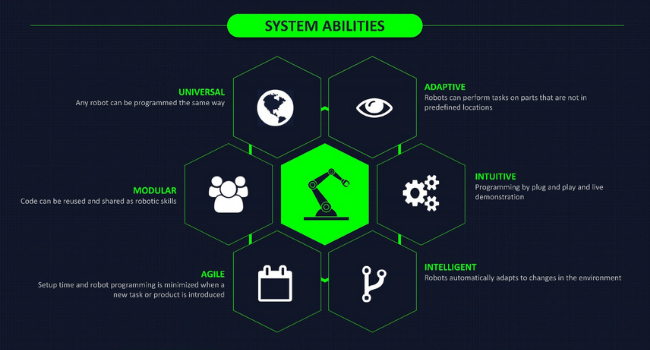 Via the RiFLEX software, which is a plug-and-play solution, RiACT can help streamline the use of industrial robots and reduce costly production shutdowns for the end user.

Many companies experience bottlenecks in automating their production due to the high cost of setting up and configuring robots to perform new, complex automation tasks - a transition that often requires complex, repetitive programming to cover many types of robots, resulting in costly production shutdowns.

RiACT, a spin-out company from Aalborg University, breaks with the complexity of robot programming and creates new opportunities for the production industry with their automation software RiFLEX.
With an intuitive user interface, RiFLEX makes it easy to add new features to robots. The software platform is in comparison with the well-known Lego brick made up of virtual bricks. Each block is a feature or command that you can easily move around and add to the robot via the software platform. The software, which is a universal solution, can, therefore, automate command processes which otherwise should have been done manually, thus, minimizing the complexity and cost for the end user.

The very idea behind RiACT arose when Bjarne Grossmann and Francesco Rovida worked together on automation solutions for robots in the two EU projects FP7 STAMINA and ScalABLE 4.0.
Based on the work, an untapped potential was found within automation of industrial robots, and after a market study and a confirmation of the need, work began on founding the company RiACT.

The Technology Transfer Office at Aalborg University has in the work helped with a clarification of rights in connection with the two EU projects. Including an option agreement and a non-exclusive license agreement with RiACT for the use of the software technology.
In collaboration with Open Entrepreneurship, AAU Technology Transfer Office has also assisted in building the business plan for RiACT together with Bjarne Grossman and Francesco Rovida who validated the first market for the company’s products. A work which really took flight when these two, decided to expand the team to include the company's CCO, Magnus Philip Ritzau, who as a commercial partner has been an important part of the company's commercial path.