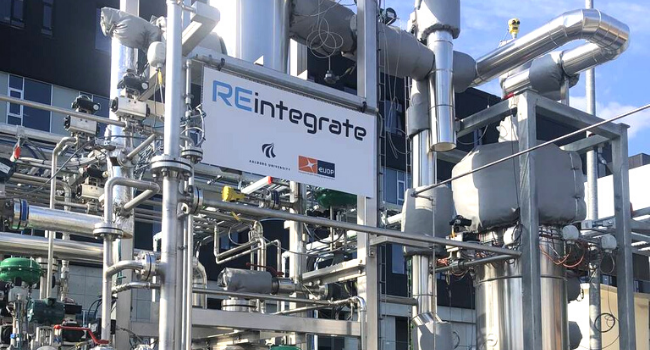 In a world where the focus on a green transition is growing day by day, the use of fossil fuels, and especially the CO2 derived from here, has become a major focus point throughout the world.

Based on his research in electrolysis, Professor Søren Knudsen Kær, from the Department of Energy Technology at Aalborg University, early saw a business opportunity in exploiting the potential of CO2 by-products from other processes, together with hydrogen extracted by electrolysis driven from overproduction of power from wind turbines.

This became the starting point for Søren Knudsen Kær's research into e-methanol synthesis systems at AAU, the founding of REintegrate and especially the Power2Met project. The latter project is supported by EUDP and has resulted in the design and construction of a pilot plant for a complete electric-to-methanol plant, which by utilizing CO2 and hydrogen in a synthetic process, today produces green methanol.

REintegrate is a Danish spin-off company founded in 2018 and is based on research from Aalborg University. In addition to Professor Søren Knudsen Kær, founder and CTO, the team consists of Lars Udby, founder and CEO and Mads Bejlegaard, COO.

The new production technology, on which REintegrate is based, primarily consists of a new and unprecedented combination and optimization of known solutions, as well as new knowledge based on e.g. Søren Knudsen Kær's research at AAU.

Biogas plants that produce methane which is fed to the natural gas grid, today have a by-product in the form of CO2, which can have negative climate impacts. Wind turbines and solar cells are some of the sources we have today for CO2-neutral electricity.
In the process that REintegrate has created, the CO2-neutral electricity from e.g. wind turbines is used to split water into oxygen and hydrogen via electrolysis. The hydrogen is then added via methanol synthesis to excess CO2 from the biogas plants, the result of which is liquid e-methanol.

The technology is a Power-to-X, carbon-neutral energy storage and sector coupling technology. The liquid e-methanol can already be used i.a. as an additive to petrol for a greener transport sector, but also as a raw material for the chemicals sector, where it can be used by i.a. plastic manufacturers.

In 2020, REintegrate has just entered into an agreement with the fuel retailer Circle K for the purchase of buying up to 50m liters of e-methanol worth a quarter of a billion kroner. At the same time, the company European Energy, which builds wind and solar parks, has entered into an agreement to own a part of REintegrate. European Energy becomes a minority owner and joins the management.

Since the start of the project, AAU Technology Transfer Office has worked closely with Professor Søren Knudsen Kær in the work of validating the reported inventions. From the idea of ​​REintegrate arose, AAU Technology Transfer Office has assisted with the clarification of the commercial opportunities for the company as well as IPR rights and freedom to operate. In collaboration with Open Entrepreneurship, a sustainable business model has been created, which today is a part of the basis for REintegrate.